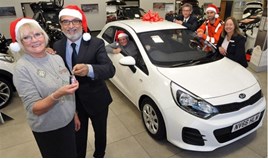 Festive spirits soared at Jennings Motor Group when the retailer handed over the keys to a brand new Kia Rio following her success in a raffle in aid of the Great North Air Ambulance Service.

Jennings managing director Nas Khan donned his Santa hat to complete the hand-over seven months after the dealer group vowed to show their support for the emergency service with the donation of the car.

And 69-year-old raffle winner Kath Mewse could not have been more grateful.

Describing her surprise at receiving the call to say she had won the raffle earlier this month, the Middlesborough-based grandmother said: “My knees went to jelly. I just couldn’t believe it. To tell you the truth, I still can’t.

“I phoned the kids. My daughter, who has just bought a car, said ‘I wish I’d have known’. Everyone’s delighted for us, it’s been brilliant.”

Kath’s husband Malcolm works at another car dealership just around the corner from Jennings on Preston Farm, Stockton.

But Jennings and the Great North Air Ambulance team were celebrating just as much as the lucky couple after it was announced that the car raffle had raised more than £120,000 for the charity.

Khan said: “We are absolutely delighted to have been able to support the charity and their annual car raffle by donating a brand new Rio from the popular Kia range.

“The promotion has been a phenomenal success and raised an incredible amount for an extremely worthy cause.

“On behalf of Jennings Motor Group, I would like to wish Mr and Mrs Mewse many years of happy motoring in their new Kia car.”