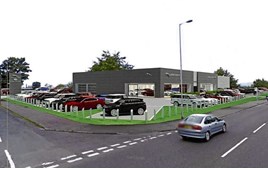 John Clark Motor Group will create new sports facilities for a junior football club and an amateur boxing academy as part of plans to develop a £10 million JLR dealership in Dundee.

Lochee Harp Junior Football Club and St Francis Amateur Boxing Club are two groups who will benefit from the development, with a new 3G football pitch and five-a-side training pitch among the plans.

John Clark Motor Group managing director, Chris Clark, said in a report published in the Dundee Evening Telegraph: “It is a significant venture for the group. We are delighted that this project will bring considerable benefits for both institutions, the local community and our customers.”

Both sports clubs have publicly supported the John Clark’s plans, reported the Telegraph, with St Francis president Jimmy Marr stating that the new facilities were “much needed”.

Jim Kelly, Lochee Harp JFC president, added that the plans were a “win-win” for the club.

One resident did criticise the plans, however, stating that the land would be better used for affordable housing.

“Dundee is desperate for affordable social housing, which this land should be used for.”