Dicksons of Inverness named Kia's Dealer of the Year 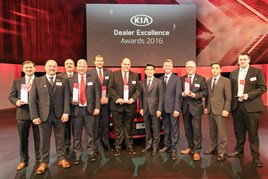 Dicksons of Inverness were named Kia Motors UK’s Dealer of the Year as the Korean brand recognised the best performers in its 187-strong network.

The best performing Kia dealers were rewarded for outstanding achievements throughout 2016 at Kia Motors (UK) Ltd annual dealer conference in Liverpool on the January 10th.

Paul Philpott, president and chief executive of Kia Motors (UK) Ltd, said: “It always makes me extremely proud to be part of Kia when I see the commitment our dealerships and their staff show, and it’s a privilege to be able to recognize and reward the best performing dealerships in a number of categories.

“Everyone within the Kia dealer network has worked very hard to achieve yet another record breaking year in 2016 and with ten new products coming to the UK in 2017 we’re excited to see the continued successes that this brings.”

Dealer of the Year – judged on a combination of the results for the sales, aftersales and family-like care awards – was won by Dicksons of Inverness

The Dealer Excellence Award – judged on a combination of the results for the sales, aftersales and Family-like Care categories – was won by Flear & Thomson (Dunfermline).

Drayton Motors (Boston)claimed the Dealer Excellence Award 2016, which is judged on a combination of the results for the sales, aftersales and family-like care categories.

In 2017 Kia will aim to build oin its 79,539 UK registrations in 2016 with the launch of the all-new Rio and Picanto hatchbacks as well as two all-new models in segments that Kia have not previously been in.

The brand will also celebrate the seven year anniversary of the launch of its seven-year warranty.