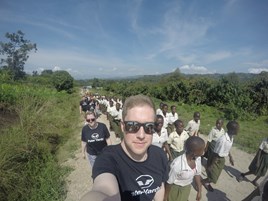 Peter Vardy will aim to feed, educate and clothe vulnerable children in East Africa through its involvement with a major aid project worth £1.26 million.

A contribution of £15 will be made with the sale of every car sold and up to £5 for every car serviced during 2017, as the dealer group’s charitable Arm, the Peter Vardy Foundation delivers funding to its newly-launched Giving Back campaign, One Child.

The scheme has been developed in partnership with Fields of Life, which has been operating in East Africa for 23 years, building 117 schools and enabling 100,000 children living in extreme poverty to receive a quality education.

Quoted in the Milgavie and Bearsden Herald, Fields of Life chief executive Richard Spratt said: “We are delighted to be partnering with the Peter Vardy Foundation on the One Child campaign and believe that, supported by its customers, we can make a real difference to the lives of thousands of vulnerable children.”

Peter Vardy, chief executive, said: “Our aim is to assist 5,000 children and I believe that members of the Scottish car-buying public will back our ambition to bring much desperately-needed help to vulnerable children who, once educated, can then go on to help themselves and their communities.”

The Peter Vardy Foundation was created as a way of distributing 10% of the profits from Peter Vardy to good causes. It exists to improve the lives of vulnerable children, both locally and internationally.

Last October ten employees from the Peter Vardy Group travelled to Uganda to see the results of the Foundation’s fund-raising first hand.