Motorpoint partners with Teens Unite to fight against cancer 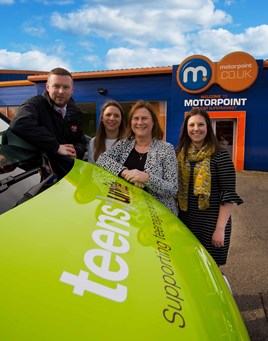 Motorpoint has signed a partnership with cancer charity Teens Unite, for a minimum of 12 months, to help raise money for young people with the disease.

A roller disco and celebrity car wash are some of the many fundraising ideas planned with Teens Unite at Motorpoint in Chingford.

Based in Broxbourne in Hertfordshire, Teens Unite runs a series of regular workshops for teens affected by cancer from across London and the South East. It is also hoping to open its own Respite Home in the near future where teens can come when they need respite care.

Charles Faulkner, general manager of Motorpoint in Chingford, said: “We’re delighted to have teamed up with Teens Unite in their 10th anniversary year to support the important work they do as a charity helping teens and their families across London and the South East cope with the impact that cancer has on their lives.”

Debbie Pezzani, CEO and co-founder of Teens Unite, added: “We are incredibly proud to be working with Motorpoint to raise funding and awareness for Teens Unite. Seven young people are diagnosed with cancer every day in the UK and we are committed to uniting them from diagnosis, through treatment and beyond. With the support of Motorpoint we will be able to reach out to even more young people during their fight against cancer.”