Automotive cannot ‘rely on passion for cars’ when recruiting 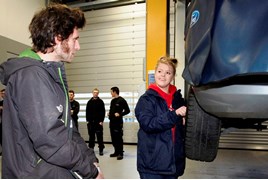 The automotive retail sector must do more than simply “rely on a person’s passion for cars” when attracting the talents of the future, according to TrustFord HR director Sharon Ashcroft.

Ashcroft said that it was important to use this week’s tenth National Apprenticeships Week to assess how the industry could improve its training and development to help fill a void of 5,000 vacancies across the British automotive industry.

She said: “A talented workforce is key for the UK to remain the most productive automotive nation in Europe. But we can’t rely on a person’s passion for cars alone to attract potential talent.

“We need to show how the automotive industry offers fulfilling and engaging employment opportunities to passionate men and women.”

TrustFord takes on more than 70 apprentices every year and Ashcroft said: “We train apprentices over 18 months to three years, depending on their role, ensuring they earn NVQ-level qualifications.

“It’s a clear and compelling career path for people of all ages, from school leavers to those changing career.”

In this week’s Spring Budget the Chancellor of the Exchequer, Phillip Hammond, set out plans to support 13 to 16-year-olds on a path to attain the technical skills required in the automotive industry.

With the Apprenticeship Levy about to come into force, the Chancellor made an effort to address the skills shortage by introducing T-Levels, an alternative to A-Levels, and maintenance loans those undertaking higher level technical qualifications at the new Institutes of Technology and National Colleges.

Mr Hammond added: “We will increase by over 50% the number of hours training for 16 to 19-year-old technical students, including a high-quality three month work placement for every students, so when they qualify, they are genuinely ‘work-ready’.”

Mr Hammond said that the changes would support the further three million apprenticeships targeted by the government by 2020, which he hopes will be realised by the Apprenticeship Levy.

TrustFord panel beater Chelsea Riddle, is one young apprentice already gaining the skils to ensure she is “work ready”.

The 20-year-old qualified as a panel beater in January, four years after joining TrustFord as an apprentice.

She now works full time at TrustFord's Bradford dealership and is relishing the problem-solving and challenges the role involves.

Chelsea studied panel beating for one year at college before applying for her apprenticeship, and says it was the best way to become skilled at her craft.

"The classroom is totally different to what life in the bodyshop is going to be like," she said.

"In your first year as an apprentice, you start by watching and learning from the team and in your second year you start doing easier jobs and doing more things by yourself.

“By the time you qualify with your NVQ Level 2 in the second year, you're welding, repairing and doing strip and refits.

“At NVQ Level 3, in your third year, you're working on much bigger jobs, like quarter panels and chassis legs, and you're doing far more by yourself – you'll get job cards to do on your own."

Riddle said she would recommend apprenticeships to anybody looking to fast-track into a career, especially with TrustFord.

"TrustFord have been amazing. They always give you such great support and there's always someone to go to for advice, even if they're not in your department."