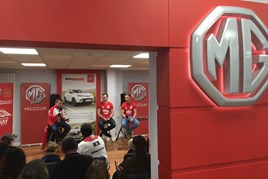 The teammates, both racers from the MG RCiB Insurance Racing team, visited the Burton-on-Trent-based dealership to talk about their aspirations for the 2017 season, as well as their move to MG.

The Good Friday visit from the BTCC drivers crowned a busy period for T L Darby, which officially joined MG’s nationwide dealer network in March – a month which saw it retail 13 new MGs.

“It was great to see Árón Taylor-Smith and Daniel Lloyd visit the showroom earlier this month and give BTCC fans in the Staffordshire area the chance to engage with two of its brightest young stars.”

The dealership celebrated joining MG’s growing nationwide network by launching a number of initiatives to promote the MG range.

Throughout March, T L Darby took its showroom on the road and installed two of its latest models in Burton’s Cooper Square Shopping Centre.

The display, which included MG’s stylish Supermini, the MG3, and all-new SUV, the MG GS, proved so popular with one shopper that they placed an order for an MG3 on the day.

T L Darby recently celebrated its 50th anniversary and marked its relationship with MG by redeveloping an existing showroom to provide the brand with a dedicated area of its own.