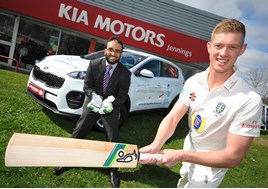 Durham and England cricketer Keaton Jennings has struck up a sponsorship deal with a namesake car dealer group as part of a match made in County Durham.

David Phillips, franchise manager at the Parsons Road branch, said; “The compact SUV Sportage is by far the most popular in the range and we are absolutely delighted and extremely proud to be able to supply one of the models to such a young and professional cricketer as Keaton.

“I would like to wish him many months of happy motoring in his new Kia.”

Keaton’s first club team was Pirates Cricket Club in Johannesburg, prior to arriving in the UK in 2011 to pursue the sport professionally.

Both test matches were against India and took place in December 2016 when he made his test debut scoring a century in Mumbai.

Keaton said: “I am delighted with my new Jennings Kia car.”