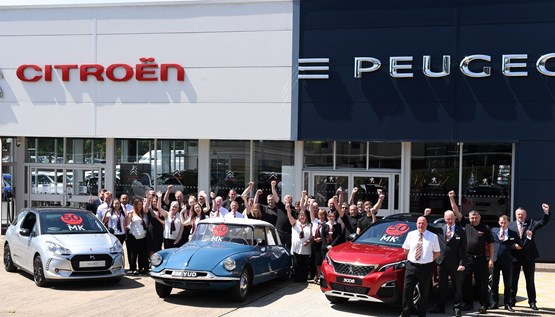 Perrys Motors Sales' Milton Keynes operation is celebrating its 50th anniversary since opening its doors in 1967.

After five decades of trading, the Bilton Road-based dealership has 71 employees and specialises in selling new Peugeot and Citroen vehicles, alongside used.

Perrys Motor Sales’ chairman Ken Savage said: “Some Milton Keynes residents may recall some poignant moments for the business – for example, back in December 1972, a fire totally gutted our workshops which resulted in them having to be rebuilt entirely.

“Others might recall when TV star Jan Leeming opened the used car showroom in December 1997.

"Perrys also created a bit of a stir in the press when we created an ‘alien invasion’ story following a sighting of UFOs above Milton Keynes when our new used car site opened in 1996…it was really a great photo opportunity thanks to new flood lights on the forecourt!

“Over the years we’ve grown steadily thanks to our strong customer-centric ethos and the expertise that our staff are committed to delivering to ensure that we always go that extra mile.

“It’s amazing to look back at all that’s been achieved by those at the dealership in the last half century, and I would like to thank our fantastic customers and staff who we’ve had the pleasure of working with over the years.

“We really appreciate their support and wouldn’t be here without them! Here’s to a great next 50 years.”