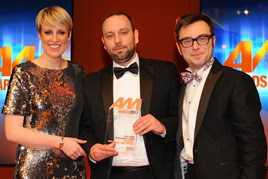 Beevis has 174 employees and 11 managers reporting to him, with each franchise run as an individual department.

Beevis has had to make tough decisions – and spot new opportunities – in the past 12 months.

For example, the site’s fleet and bodyshop departments were closed as they were losing money, but realising the needs for body repairs, Beevis introduced a SMART van business, with five vehicles carrying out repairs in the local area, averaging £50,000 in business per month.

Incentive income from manufacturers has increased by 87% in 12 months for new and commercial sales.

“The majority of this increase has come from understanding what is on offer from manufacturers and what our route to market is to ensure we achieve this,” Beevis said.

From his staff, Beevis encourages creativity and support of new ideas and a ‘why not?’ attitude.

“Too many times the answer to a question from a customer or colleague has been ‘no’ before anybody considered the consequences. Now we think why not?

“Sometimes the answer is still no, but both staff and customers can see we have tried to accommodate them. So long as our answer is explained, people understand. More often, the answer is yes. The impact on staff morale is huge.”