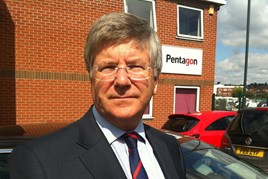 The vehicle division of Imperial Holdings SA has acquired the Derbyshire-based group Pentagon Motor Holdings for a sum reported to be R493-million (£28.5m).

Imperial chief executive Mark Lamberti said: “Imperial has strong global partnerships with leading vehicle manufacturers and we are delighted to expand our international retail footprint into the passenger and light commercial vehicle market in the UK through the acquisition of Pentagon by Motus.

“Pentagon is a well-respected and established vehicle dealership group with deep expertise and a strong national reputation in the passenger vehicle sector.

“It will complement our existing commercial vehicle business, which has produced commendable results since its acquisition in 2006.”

Commenting on Pentagon’s acquisition by the Motus Corporation – which will take effect on September 1 – David Kendrick, Partner at UHY Hacker Young, who we understand advised the shareholders of Pentagon with the sale, said: “Trevor and his team have built up a phenomenal business over the past few years, starting with the Vauxhall business in Derby through the Motors Holding scheme initially.

“The growth and diversification they have achieved has enabled them to create a strong regional group which made them attractive to many acquirers such as Imperial.

“This acquisition hopefully gives Imperial a strong base to build from in the retail sector and again we see further international investment entering the UK industry which is an ever increasing trend at present.”

The group is also the largest DAF Trucks Dealer Group in the UK with 24 DAF Trucks dealerships.

Imperial Holdings SA has over 50,000 employees worldwide who are responsible for the growth and continued success of the group that began as a motor dealer in downtown Johannesburg in 1948.

The group’s annual turnover is in the region of £7bn.

Speaking at the time of the results, Reeve said: “These are really great results but I always feel there is room for improvement and we are constantly looking for ways to improve the way we do things.

“Our business has seen significant growth in recent years, and so over the past 12 months we’ve been focussing on strengthening our senior management team to reflect the increased scale of the business.”