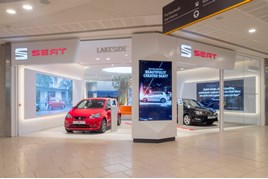 Seat UK is preparing for the official opening of a second shopping centre store at Westfield, London.

The new store has already opened its doors to customers, a year on from the launch of Seat’s first ever global store at Intu Lakeside, Essex, and the brand will officially open its second store with a VIP event on Thursday September 28th.

One of Europe’s largest urban shopping and leisure destinations, the Westfield store will deliver significant exposure for the brand in West London by way of a huge annual footfall of 27 million visitors, and provide leads to franchised operator Group 1, which will run the store.

Speaking at last September’s opening of the 150m² Lakeside facility, which benefits from exposure to a potential annual footfall of 26 million visitors at the Essex location, said: “Our new store is a world first for us, and I’m delighted to be working with Group 1 Automotive to deliver such an exciting venture.

“We are passionate about finding ways to make it even easier for people to discover and fall in love with our award winning range of cars.

“With a great team of product experts on board, a stunning new store and experience centre, and the all new Seat Ateca also launching next week, I am sure the millions of shoppers visiting Intu Lakeside are in for a real treat.”

Darren Guiver, deputy managing director at Group 1 Automotive, which operates the site, added: “We’re really excited to be the first car retail store at Intu Lakeside, and working closely with the Seat team to deliver this exciting new concept.”