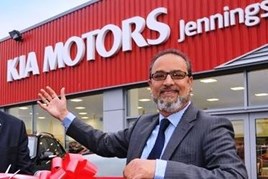 Jennings Motor Group is set to gain two more dealerships for Kia and Mazda, which will operate adjacent to Sunderland Football Club's Stadium of Light.

A former two-storey dealership is being completely refurbished to house the two franchises in separate five-car showrooms, which will share an eight ramp workshop and standalone valeting building at the rear of the site.

Nas Khan OBE, managing director, said bringing the business to Wearside will give a boost to the local economy and create 24 jobs.

"Plans are also in place to extend the existing building by 20% to further increase the showroom sizes, but that is scheduled at a later date," he added.

Jennings Motor Group already represents Kia at Stockton and Washington and Mazda at Middlesbrough, in addition to its Ford, Seat and Harley Davidson businesses. It also operates a Subway store.