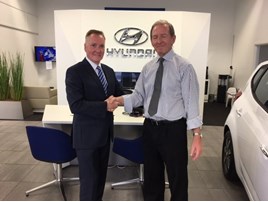 TWG Hyundai is preparing for expansion of its used car operation after becoming part of the Corkills Group in a £2.5 million acquisition completed this week.

The solus operation on Hargreaves Road, Northwich, Cheshire, claims to be “the longest established Hyundai dealership in the UK” and will continue to trade under its current TWG name following the deal, which was completed yesterday (September 26).

Corkills, which is owned by Adrian Kermode, already operates Volkswagen franchises in Wigan and Southgate and has appointed former Volkswagen regional network development manager Jenny Bell as dealer principal for its new venture with the Korean brand.

Bell, who took up her post this week, told AM: “I was network development manager working with Adrian Kermode’s existing businesses and was approached about this project. I helped with the acquisition, working in my spare time, and have now taken up the role as dealer principal.

“This is a new challenge for me. I’ve obviously made the move from Volkswagen and I had been in a similar role with Mazda for ten years before that.”

Bell, who has worked in the motor industry for 25 years and was the first female recipient of Hyundai’s President’s Award, added: “It’s an exciting time for the business. All the staff are being retained and some were added to the headcount this week.”

Corkills’ plans for the TWG business include the expansion of the business’ used car operation and the addition of more premium stock, Bell said.

TWG managing director, Brian Phillips, had operated the Northwich Hyundai operation for 33 years and has now retired from the business at the age of 71.