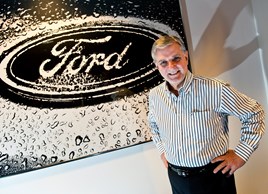 Peoples, the largest independent dealership in Europe retailing only Ford cars and commercial vehicles, has posted a record turnover of £276 million in its annual report.

The AM100 group also increased year-on-year commercial vehicle sales by 88%.

In the face of what chairman Brian Gilda (pictured) called “fierce competition and a diminishing market” the company achieved its second-best year ever with profits dipping slightly to £6.32m against last year’s record-breaking £7.05m.

Gilda said: “Throughout the year the group has bettered all the operational benchmarks and financial milestones identified by the directors to our shareholders, bankers and trading partners.

“The real story, however, is to be found in the determination of my directors, management and staff to once more deliver up the best possible results in the face of fierce competition and a diminishing market.

“That, coupled with the outstanding loyalty of our customers, is what makes these results special.”

“Peoples has been in business for 35 years. We’re a privately-run company and we pride ourselves on the service provided to our customers by our loyal, long-serving and hard working staff.”

In his chairman’s statement, Gilda warns that consumer confidence was being damaged by uncertainty over Brexit and statements by politicians at Holyrood and Westminster on how vehicles were powered and, consequently, the outlook for the industry as a whole was being affected.

He said: “The combination of government actions north and south of the border along with no hard evidence implications of Brexit has led to a slowing of consumer confidence with the collateral damage on results.”

As Chancellor Philip Hammond prepares for his Autumn Budget statement next month, Gilda urges him “not to tie the industry’s hands” by announcing unrealistic emission targets or penalising motorists with increased taxes.

“Right now we are an easy target but all governments should be aware of the amount of people employed in our industry, tipping the scales too far the wrong way could cause distress both for the industry and ultimately the consumer.”

Sales across the Peoples Ford group, which comprises three dealerships in Scotland and three in the north-west of England, totalled 18,664. Commercial vehicles increased 88% while new car sales, in line with the industry generally, fell by 14%.

“I recognised early on in our financial year that the private sector would be the first to show signs of stress and as a consequence redoubled our efforts in the commercial vehicle market to ensure volume, share and bottom line.”

Peoples employs 411 staff across its dealerships in Scotland and England and invests heavily in staff training to deliver the highest level of customer service.