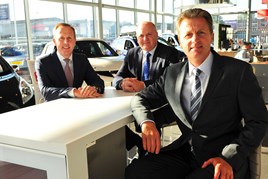 Motorline has continued the growth of its network with the completion of the acquisition of KAP Motor Group’s Ashford Nissan and Peugeot franchises.

The Canterbury-based retail group takes its representation with Peugeot to three and the Japanese manufacturer to nine following completion of the deal, for an undisclosed sum.

Motorline’s latest acquisition follows the acquisition of Rowstock Nissan in Newbury in August and of Hereford Hyundai, from Stirling of Hereford, for an undisclosed sum, in July, taking its total number of dealership sites to 48.

Motorline now operates a total of 48 dealerships, five of which are located in Ashford plus four Volkswagen TPS Centres across the South East, South West and the Midlands.

Group chairman Glen Obee told AM that the KAP franchises in Ashford would be re-branded as Motorline sites, adding that there was a “plan to refresh the site and invest in latest retail environments for both brands and build on developing the staff at the dealerships”.

Obee added: “The company is delighted to have acquired the Ashford Nissan and Peugeot businesses which fit perfectly into the group’s existing Kent representation for both brands.

"The group has already identified a number of operational synergies which will complement our existing Nissan and Peugeot operations.

"The two new dealerships increase to five, the number of dealerships in Ashford and further strengthens the group operations in East Kent.”

As well as its acquisitions in 2017, Motorline has opened four brand new dealerships in Gillingham and Dartford.

The group is also set to open three new dealerships early 2018 at Gatwick which are currently in build for Peugeot, Hyundai and Lexus.

KAP’s sale of its franchises in Ashford leave the business with a network of four sites – in Brighton, Canterbury and Folkestone – retailing Ford, Peugeot, Nissan and Suzuki brands.