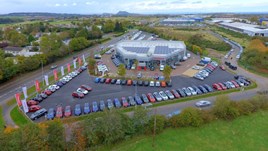 Alex F Noble & Son has paved the way to used car sales growth with a £150,000 transformation of land adjacent to its Nissan premises at Straiton by Loanhead.

The Midlothian car dealership, which this year celebrates its 85th anniversary, has transformed a half-acre of formerly unused land at the front of the facility to help grow its used car sales by liberating accommodation over 100 more vehicles.

Taking four weeks to complete, the move comes as part of a planned growth strategy which has also included the complete refurbishment of the Straiton showroom.

David Noble, dealer principal at Alex F Noble & Son Nissan, said that the move is already resulting in a ‘noticeable increase’ in customer footfall as a direct result of much improved stock visibility.

He said: “Concurrent with the steady growth of both the business and the Nissan brand, additional display space for our used vehicles was an absolute priority for us.

“We had simply outgrown our existing display facility which prompted us to maximise the potential offered by the unused space we had at the front of the premises.

“The new display area is very visible, particularly from passing traffic on the main A701 road which runs past the front of the dealership and I’m pleased to note that this improved exposure of our Nissan vehicle range is already paying dividends. “We’re seeing a tangible increase in the number of customers visiting the dealership and also getting very positive feedback from them on the larger choice of vehicles now on display.”