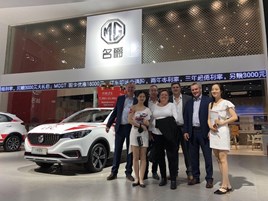 Chorley Group managing director Pauline Turner was given a “glimpse into the future” when she was invited to MG's Chinese headquarters.

Turner, who heads up a group of 10 dealerships across the North West was “one of just four British motor dealers invited” to visited the Shanghai-based factory by the head of MG UK.

Turner said: “Chorley Group have only recently become an MG dealership, so the visit was the ideal opportunity to see the quality of the product, build relationships with the manufacturers and take a look at the designs for the next generation of cars that will roll off the production line."

As well as experiencing the MG production line, she had the chance to see some of the cars of the future at the Guangzhou motor show and to take a look behind the scenes at some of the concept cars being created at MG’s research and development centre.

“We were given a full tour of the research and development facility, which gave us a fantastic insight into the direction MG is heading in,” said Turner.

“The future is very much focused on electric cars. Fuel economy has taken a real leap forward and in terms of environmental impact we’re going to see cars that are 100% recyclable.

“The Chinese really respect the British heritage of MG and take huge pride in creating vehicles that are well made.

“This emphasis on quality will enable us to better inform our customers and to give them confidence in their choice of car.”