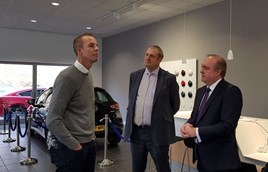 Former skills and equalities minister Nick Boles MP visited a franchised dealership in his constituency on Friday to learn about some of the issues affecting motor retail.

They outlined the apprenticeship and training programmes used across the group, which has Alfa Romeo, BMW/Mini, Kia, Mazda and Volvo franchises in East Anglia.

There are eight apprentices in the group currently and three more are being recruited, across roles in technical, accounts, administration and IT functions.

Stone said the visit provided “a good opportunity to broaden our horizons” as the group tended to remain low key. Stone was able to enlighten Boles that dealerships are not purely about sales, and also raised the issue of consumer uncertainty impacting car sales while the UK works towards Brexit.

After the event, Walker told AM that the Apprenticeship Levy is putting a lot of strain on medium-sized businesses. It has increased the level of administration required, there is increased complexity, and it causes negative cashflow issues because there is a delay in being able to draw down the funds, he said.

As a result, the company has to focus more resources on it, he added.

The levy, introduced in April 2017, requires all employers with an annual wage bill of £3 million or more to pay 0.5% of the cost into a fund topped up by the Government to finance training, which they can then draw from within 24 months to pay for eligible apprentices.

The British Retail Consortium has called for additional flexibility in what the funds can be spent on, because it believes currently retailers are unable to fully engage with the policy.

The visit to Donalds Mazda was arranged by the National Franchised Dealers Association, which wants MPs to get a better understanding about how franchised dealers work.