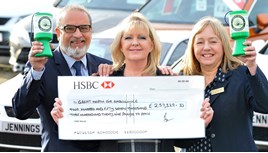 Jennings Motor Group has celebrated reaching new heights with its charitable work after its two-year fundraising effort in aid of the Great North Air Ambulance Service (GNAAS) succeeded in raising over £250,000.

The Middlesbrough-based AM100 car retailer has completed two years of fund-raising to reach the landmark total and donated a brand new car each year for the charity’s annual car raffle as part of its bid to assist the North East's "flying doctors".

Among the innovative cash generating ideas has been a sponsored weight-loss competition for staff, a variety of physical outdoor activities, including marathons and bike rides and a number of bake-offs, raffles, coffee mornings and pie and pea suppers.

Jennings managing director, Nas Khan OBE, said; “It’s been an absolute privilege working in partnership with the dedicated and committed team at Great North Air Ambulance Service over the past two years.

“We’ve had great fun and at the same time raised a fantastic amount of money for an extremely worthy cause.

“On behalf of Jennings Motor Group, I would like to take this opportunity to wish the Great North Air Ambulance Service all the very best for the future.”

Khan and his PA Bev Stephenson handed over a cheque for the sum of £257,329.33 to Mandy Drake, deputy director of public liaison, at the Great North Air Ambulance Service, at an official hand-over at the group’s headquarters on Cargo Fleet Lane, Middlesbrough.

Grahame Pickering, chief executive of GNAAS, said: “This has been one of our most successful corporate partnerships of all time – we’ve been blown away by the enthusiasm shown by staff and customers at Jennings Motor Group.”

Jennings operates Ford, Kia, Mazda and Seat branches across the North East, as well as two Harley-Davidson dealerships and a Subway store.

Last Spring the group’s philanthropic managing director, Nas Khan, was appointed as an OBE for his charitable works and his contribution to the economy.

In 2010, Khan embarked on an epic charity campaign to help save and rebuild the lives of people in Pakistan, following devastating floods.  An appeal was set up through his own registered charity, The Emaan Foundation.

On completion of the village, which has officially been named ‘The Emaan Village’ after the charity, Nas launched a second appeal with the aim to build a health centre for the village community and surrounding areas. To date, funds are in excess of £20,000.