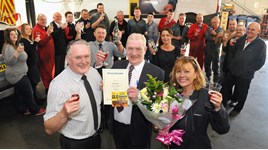 Workshop controller Philip Johnston scored a hat-trick of celebrations at Jennings Motor Group when he marked his 65th birthday, 15 years’ loyalty, and his retirement on the same day.

Johnston had worked at the group’s service department on Parsons Road in Washington since 2002, after starting as a workshop controller.

In recent years, he also became involved in the parts side of the business, as well as helping out with visual health check work within the busy service department.

On the day of his retirement, he was greeted with both birthday and retirement balloons and banners, cards, a cake, gifts, and a loyalty certificate and high street vouchers, courtesy of his colleagues at the Washington-based dealership who wanted to make it a day to remember.

Johnston said: “It was a lovely surprise and quite an emotional day.

“I have made many friends over the years at Washington, as well as witnessing a lot of changes within the company as a result of expansion and investment plans, as well as having to adapt to new technology.

“I’d like to thank everyone for their very kind wishes and generous gifts.”

Three members of staff, including service manager, June Appleyard, group service and bodyshop manager, Brian Johnston and group manager service analyst, Alan Davison, have all been managers to Phil over the years and they were all delighted to be part of the surprise presentation and party celebrations.

Jennings Motor Group’s  service manager at the Washington-based site June Appleyard said: “Phil has been an absolute pleasure to work with over the years, and he’s going to be a tremendous miss in the department.

"On behalf of the company and all of his colleagues at Washington, I would like to congratulate him on his birthday milestone, as well as achieving 15 years’ loyalty, but most important of all I would like to wish him a very healthy and happy retirement.

“It’s not every day, you have three reasons to celebrate!”