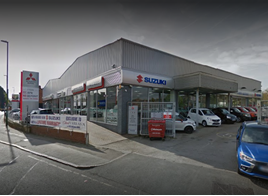 Stoneacre Motor Group is once again on the acquisition trail after buying the Nottingham-based Chris Variava  dealership complex.

Stoneacre's franchise and development director Philip Wade encouraged dealer groups, owner drivers and potential franchise partners to get in touch with the Thorne-based AM100 operation as it continues to pursue an ambition to become a £1 billion turnover business by 2020.

The Chris Variava business includes Suzuki, Mitsubishi, Alfa Romeo and Jeep franchises all at one location.

Wade said that discussions surrounding further potential acquisitions would be carried out in “complete confidence”.

Stoneacre currently stands 16th in the AM100 and represents 20 franchises in 85 locations while employing over 2,500 people.

Last month the group reported that there was “ample opportunity for growth” after reporting a 28.5% increase in turnover and pre-tax profits up by 29.5% during its 2017 financial year.

In 2017 its acquisitions saw it expand with the Ford, Fiat and Jeep franchises, as well as adding Mitsubishi and Honda to its portfolio, with many of those new relationships strengthened with the acquisition of the Chris Variava operation.

Stoneacre said that it would be retaining all staff at the operation on Nottingham Road, Basford, Nottingham, which group managing director Shaun Foweather said had a “great reputation”.

Foweather said: “Chris has created a business over 40 years which has a great reputation in the local area.

“His retirement from the business has allowed an opportunity for Stoneacre to expand its operations in Nottingham.

“We retain all of the existing team and intend to provide them with full head office support, training through the Stoneacre Training Academy and full integration into the Stoneacre culture to ensure that customer satisfaction is further enhanced under the Stoneacre brand.

“I would like to wish Chris a happy and fulfilling retirement and welcome the Chris Variava team into the Stoneacre family.”

During 2017 Stoneacre’s growth was driven partially by the acquisition of a Lookers site in Sheffield, which saw the brand expand its prestige used car operations.

The Gilder Group acquisition, in June, saw Stoneacre add Honda and Mitsubishi businesses to its portfolio, along with a Honda franchise in Sheffield.