Car dealers’ relationships with their manufacturer partners have suffered “further deterioration” amid the current uncertainty of the retail market, according to the latest results of the NFDA’s biannual Dealer Attitude Survey.

The National Franchised Dealers Association’s Winter 2017/18 survey of car retailers’ attitudes towards their OEM partners showed and average points score, in the 0-to-10 overall ratings down by 0.3 points on average, the body said.

And the FCA Group were dealt the greatest blow by its retailers as its four UK brands – Alfa Romeo, Fiat, Jeep and Abarth – propped up the bottom of the rankings.

“This is -0.3 points lower than six months ago and indicates that the relationship has further deteriorated.” 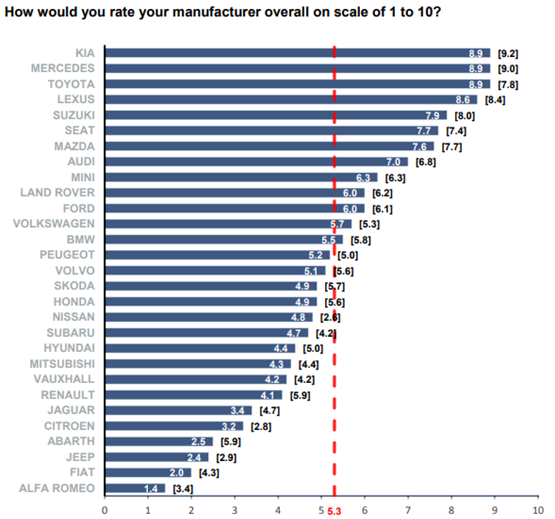 The results of the Dealer Attitude Survey are supposed to give an indication of the general health of the dealer/manufacturer relationship and highlight potential difficulties between franchised retailers and OEMs.

In the Winter 17/18 survey the NFDA surveyed 29 franchised networks and received 1,893 responses from dealers, equating to a 47% response rate, the highest since the inception of the survey in 1989.

Kia, Mercedes and Toyota were the highest scoring franchises in the overall ratings offered by their dealer partners, scoring 8.9 points each.

Lexus and Suzuki closed out the top five with 8.6 and 7.9 points respectively.

In calculating an average score across all questions, Kia emerged top of the rankings with an average score of 8.6, meanwhile, with Toyota and Lexus both tied on 8.4, ahead of Mercedes-Benz on 8.3.

The highest score recorded by any manufacturer across any of the categories, perhaps reflected the growing importance of AFVs to the marketplace.

Asked ‘How satisfied are you with the alternative fuel vehicle offering?’, Toyota’s retailers scored the Japanese brand – renowned for its early adoption of hybrids and now pursuing a long-range EV strategy in partnership with Mazda – scored 9.6 out of 10.

Making the biggest improvement across all questions in the Winter 2017/18 survey, however, was Nissan.

The Japanese brand scored just 4.8 in its overall rating, but this improvement from the last survey’s bottom-of-the-table 2.6 rating came as it amassed 60.7 extra marks across all categories. 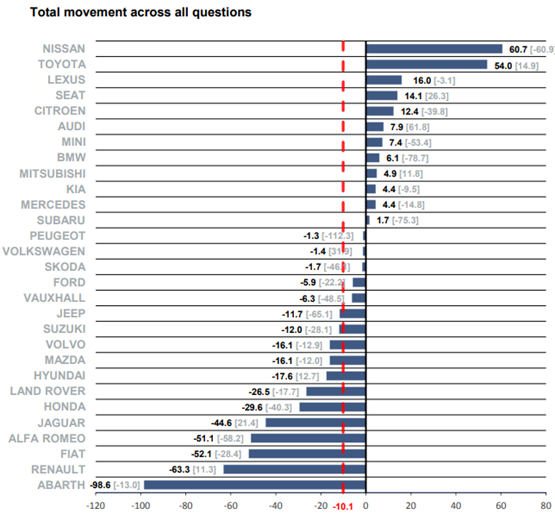 The FCA Group brands sat at the bottom of the Winter 2017/18 survey’s overall ratings, with Alfa Romeo bottom of the pile scoring a devastating 1.4 out of 10.

Despite the introduction of new Giulia saloon and Stelvio SUV to the Italian brand’s UK offering, it suffered a swing of over 50 points across the survey, to finish dead last.

Fiat finished second-bottom with a rating of 2, while fellow FCA brands Jeep and Abarth scored 2.4 and 2.5, respectively.

Joining the FCA brands towards the bottom of the NFDA survey’s overall rating was Citroen, which rose from 2.8 in the last survey to 3.2 this time around to finish just above Abarth.

Jaguar, meanwhile, was the lowest ranked premium car brand with 3.4, sitting sixth-bottom, behind the likes of Renault (4.1), Vauxhall (4.2) and Mitsubishi (4.3).

Robinson said: “The record response rate of the latest Dealer Attitude Survey shows that the survey represents an increasingly important tool for dealers to monitor the health of the relationship with their manufacturers and highlight any potential business-related issues.

“The results of the survey show that current uncertainty in the market as well as in the economic and political landscape has affected the dealer/manufacturer relationship.

“Going forward, it is imperative that dealers and manufacturers cooperate constructively to ensure that the automotive industry continues to thrive.”