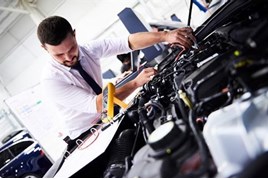 As part of JLR’s commitment to employ 1,000 former military personnel by 2020, it will run a three-week intensive course, based at the Jaguar Land Rover Academy in Warwickshire.

Joshua Gelder joined the military at 17 and now works at Inchcape Land Rover in Chester after training on the pilot scheme.

“I applied for the opportunity because I knew Jaguar Land Rover had a strong connection with the military,” said Gelder.

“I wanted to find something that would develop the skills I had gained in the military and allow me to feel part of a team again. The course really helped take my practical and theoretical skills to the next level.”

Hatfields Liverpool has employed two new technicians from the programme.

Head of business, Simon Broughton, said: “For us to employ and train someone for a level two technician role would usually take around a year, so this programme is fantastic in securing the right people, in a timely way, to support our customers.”

Bristol Street Versa has also announced today (March 9) that it has appointed Cam Baldry, a former bomb disposal officer, as its general manager.

Having previously served in the British Army for 12 years, Baldry started as a private and then left the army as a captain in the royal engineers.

He will now be responsible for the daily operations at Bristol Street Versa.

“I was looking for a new challenge and the position at Bristol Street Versa seemed like the perfect opportunity,” said Baldry.

“Bristol Street Versa has a unique customer base, no day is the same and we are making a real difference to people’s every-day lives.

“I find that really rewarding. I have a motivated team of colleagues behind me, so I am looking forward to passing on my knowledge, and am eager to learn a few things from them too.”