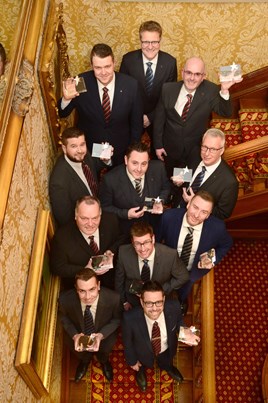 Vertu Motors has delivered recognition to its “huge amount of talented game changers” at its annual CEO Awards.

The AM100 retail group behind the Bristol Street Motors, Macklin Motors, Farnell Jaguar Land Rover, Vertu Honda and Vertu Toyota brands, has recognised the achievements of its top performing car retail colleagues across the UK at the event, which was hosted by chief executive Robert Forrester.

Robert Forrester said: “Getting involved with the CEO Awards is something I always look forward to. It highlights the huge amount of talented game changers we have in the Group, who take responsibility and add a lot of value to their role.”

The CEO awards celebrate the top performing colleagues in the company from each area of the Vertu Motors business, who have excelled and delivered outstanding performances.

The company’s board and management teams nominate a selection of managers that have impressed across the Group’s outlets and at central services, throughout the year.

Forrester then reviews the nominations to select the stand-out performance in each area of the business, and determines personally who should win one of the awards.

He said: “We now have more than 500 managers, so to be nominated is a great achievement in itself, and to win means that you have really impressed the senior team through hard work, focus and determination.

“Congratulations to all the winners.”

The winners of Vertu Motors’ annual CEO Awards were:

Accountant of the Year - Geoff Fleet at Chingford Vauxhall

General Manager of the Year - Matthew Hodgkinson at Honda Boston