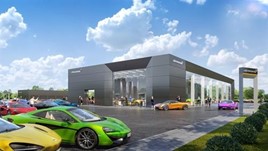 The opening marks the eighth UK location for the manufacturer and the second McLaren site to be operated by Park’s Motor Group, which also manages McLaren Glasgow.

The new showroom will be located off the M1 and alongside one of the main roads into the city, offering the visitors easy access.

Phase one of the development is now complete and ready to welcome customers at the new location at Aire Valley Drive.

Park’s Motor Group’s director Ross Park said: “We are delighted and honoured to be chosen by McLaren to open our second retailer in Leeds.

"It is a fantastic recognition for our hard working team in Glasgow who have achieved consecutive McLarenGlobal Retailer of the Year awards so the bar is naturally set very high for our new team in Leeds!

"It also represents our first automotive retail business south of the border and it's an exciting time for everyone at Park's Motor Group.”

Phase two will see a purpose-built 12,000 square feet Leeds showroom, due for completion at the end of the year.

McLaren Automotive Europe’s managing director David Gilbert said: “This new addition to the McLaren retail network is another key step in our growth plan and we are very excited to welcome McLaren Leeds as our eighth retail partner in the UK.

"Park’s Motor Group is a leading name in the luxury car market and already has an unprecedented record of success with McLaren Glasgow - an achievement that we expect to see mirrored in Leeds.”

McLaren has strengthening ties to the Yorkshire region with a £50m investment in the new McLaren Composites Technology Centre (MCTC) in the Sheffield region, where the company plans to make its carbon fibre tubs.

Currently under construction, it is expected to lead to up to 200 jobs by the time it is fully operational.