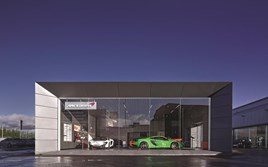 Park’s Motor Group’s McLaren Glasgow facility has repeated its awards success of 2015 by being named the supercar maker’s European Retailer of the Year 2016.

The award places the retailer on Bothwell Road, Hamilton, into the running for the McLaren Global Retailer of the Year award due to be announced later this year in recognition of its sales performance and McLaren’s highest standards of business operation.

The Retailer of the Year programme saw entries from the full McLaren retailer network in Europe, comprising 21 locations in nine key markets.

"To be crowned McLaren European Retailer of the Year for a second consecutive year is a huge achievement,” said Jon Pollock, managing director – Europe at McLaren Automotive.

“The award is real testament to the passion, knowledge and professionalism of everyone at McLaren Glasgow and I look forward to working with their team to make 2017 another successful year.”

“We're absolutely delighted to receive such an accolade again; it's a great testament to the hard work and dedication of all of our team and also the passion in Scotland for such an iconic range of cars."

All contenders in McLaren’s annual awards were benchmarked using an extensive assessment process and rated in key areas such as sales, customer service, aftersales and marketing.