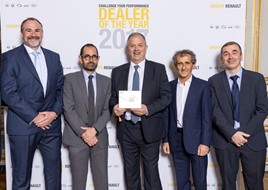 Groupe Renault has recognised three UK dealers at its global Dealer of the Year event.

RMB Northallerton was awarded Renault UK Dealer of the Year 2017 at the ceremony, selected from the entire Renault and Dacia network of dealers in the UK.

Bagot Road Jersey picked up the trophy as Dacia UK Dealer of the Year 2017.

The awards were handed out by Thierry Koskas, executive vice-president of sales and marketing at Groupe Renault, and Alain Prost, four-time Formula One champion.

The event recognised the performance of Renault dealers in 21 territories and was held near Paris last week, at the Palace of Versailles.

Winning dealerships had to excel in sales performance, customer satisfaction – for both sales and service, dealership appearance and other key brand pillars.

Vincent Tourette, managing director of Groupe Renault UK, said: “All three dealers have demonstrated a tremendous commitment to customer service, exceeding the high dealer standards and expert product knowledge we expect from all our network.

“The result of this fantastic performance is recognition not only from Groupe Renault UK but also from the global headquarters. We would like to thank them for their continued support in providing Renault and Dacia customers with the very best customer service possible.”