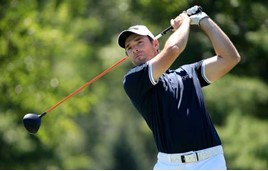 Wilson (pictured) is the Alfred Dunhill Links champion and nine time runner-up with over 100 weeks in the world’s top 50. He is also a Ryder Cup, Seve and Royal Trophy team member.

And as he plays at the Open Championship, which starts tomorrow at Carnoustie, he will be representing Lookers with its logo on his sleeve.

Heike O’Leary, Lookers’ group marketing director said: “We are proud to be supporting golf at all levels.  Oliver is a great individual and team player who represents many of the values that we share, here at Lookers.

“During our partnership Oliver will be supporting a number of initiatives and events with Lookers and will help increase participation in golf as well as partnership activation with our suppliers.

“Having Oliver representing Lookers at the Open is a great honour and we all wish him the best of luck.”

Lookers has supported a number of golf initiatives across the UK including the sponsorship of the EuroPro tour tournaments in 2016 and 2017.

Wilson hosted the event at the 27-hole club.

He said: “I recently attended a Lookers’ partner event with its marketing team and I really felt welcome as part of their family.

“Its suppliers, customers and people were incredibly professional, warm and friendly. It was a very easy and natural decision to join the Lookers family as a brand ambassador.”

Wilson, who was ranked 33rd in the world, has enjoyed victory for Great Britain and Ireland at the Seve Trophy and six top 10 finishes, including two in WGC events.

Two more runner-up spots at the Alfred Dunhill Links Championship and the HSBC Champions saw him end the season ranked seventh on the European Tour.