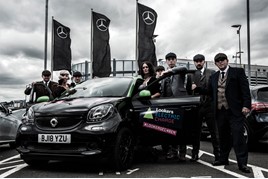 Lookers employees donned their flat caps in a Peaky Blinders-themed tribute to the West Midlands as they completed the latest leg of their Electric Charge charity challenge in aid of Ben.

Participants in the carbon-neutral challenge, which will see a relay of electric and hybrid vehicles travel 2,000 miles down the country to all 154 of the retailer’s franchised dealerships, donned attire inspired  by the hit BBC television series as they passed through the home of its infamous Shelby family.

The EV-powered relay started in Dublin in May and travelled through Scotland, the North East, Yorkshire, Greater Manchester and Merseyside before heading to the region.

Lookers chief executive Andy Bruce said: “The effort that everyone has put in to make this fund-raising project such a huge success has been really heart-warming.

“Ben is a fantastic charity that does so much to support those people in the motor industry that are in need, so it’s great to be able to give back in this way.”

A series of bake sales and raffles coincided with the Electric charge’s arrival in the West Midlands as the car dealer group got fully-behind the fund-raising push for Ben.

Along the way, EV drivers have dressed as everything from Batman and Robin, in Mercedes-Benz Wolverhampton, to Hawaiian Hula Girls at Knights BMW and Mini Stafford.

The electric car relay visited all 17 of Lookers’ Midlands dealerships in total, which include joint Mercedes-Benz/smart and BMW/MINI sites, and will now make its way to its final stages, which will include Surrey, Greater London and the South Coast.

Zara Ross, Ben’s chief executive, said: “We have been following the Lookers Electric Charge since it started in May and have been blown away by how much they’ve embraced the challenge. It’s certainly given us more than a few laughs.”