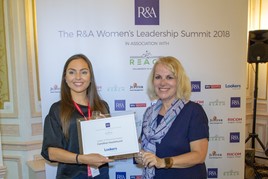 Lookers has sponsored and presented a Leader of Tomorrow award at the R&A Reach Women’s Leadership Summit.

The event, which celebrates women leaders, was held at the Women's British Open Golf Championship on the August 1.

Top women from organisations such as the BBC, Durham University and Hearst Magazines, came together for collaborative discussions on how to achieve their career and personal ambitions.

The Lookers Leader of Tomorrow award recognises someone who is making a significant contribution to the success of the organisation where they work. It has been awarded to Caroline Hazlehurst, director of operations at Deliveroo.

Heike O’Leary, marketing director at Lookers, said: “We are thrilled to sponsor the R&A Reach Leadership Summit and it is a real pleasure to award The Leader of Tomorrow accolade to such an ambitious, accomplished woman. Caroline has made a big difference to Deliveroo and we’re sure she will continue to make a positive impact in the business world.

“The summit is a great opportunity to recognise the hard work of women in business and encourage collaboration across workplaces.”

Hazlehurst joined Deliveroo in April 2015. In her time at the company, she has seen it grow from 50 employees to over 2,000 and has seen the presence of Deliveroo reach more 200 cities worldwide. Prior to joining Deliveroo, Hazlehurst held positions in Investment Banking and has held several non-executive director roles at early stage start-ups.

Lookers, which ranks third in the AM100, is keen to increase gender diversity among its workforce, with the retailer committed to the UK Automotive 30% Club, an initiative which aims to achieve a minimum of 30% of women in management positions by 2030. Lookers also encourages the retention of female employees by offering an attractive benefits package, including one year’s maternity leave at full pay.

The R&A Reach Women’s Leadership Summit, organised by, aims to help women work more closely to achieve their aspirations. The annual event brings together 90 women from business, sport, arts, media and education to discuss a range of issues in a collaborative setting, including inequality in the workplace and pay equality.

Sky Sports Golf presenter and Lookers ambassador, Sarah Stirk, who founded the Reach platform, said: “It’s brilliant that this event has been so successful in bringing women together to discuss, engage with and inspire each other to achieve their aspirations.

“Lookers is a company which values equality and diversity in the workplace and has strong female leaders across the business so it is wonderful to have them sponsor the event.”