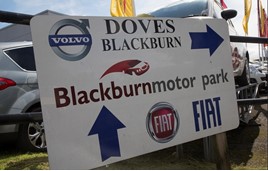 Cambria Automobiles is paring back its Fiat, Alfa Romeo and Jeep franchises this year as it looks to secure stronger profitability.

The car dealer group has already closed its loss-making Blackburn motorpark which held Fiat, Alfa Romeo and Volvo businesses under the Doves brand, and is marketing the freehold property for sale.

Earlier this year it closed the Alfa Romeo and Jeep operation in Chelmsford, and in a trading statement today Cambria revealed it will replace Fiat at Warrington with its first Peugeot franchise.

Its statement said that during the 11 months to July 31 it has either closed or re-franchised eight franchised dealerships and two bodyshops, which represented about 18% of the group’s operations, with significant disruption in day to day activity.

AM has previously reported how Cambria has added Bentley, Lamborghini and McLaren franchises and has been developing a Jaguar Land Rover ‘Arch’ style outlet in Swindon, which opened in July.

“The board is confident that the franchising changes and property developments delivered in the period will add value and lead to growth in the coming year,” said the AM100 dealer.

Adjusted profit for the 11 months is down year-on-year, Cambria said. It will release its full year preliminary results on November 21.

Its trading statement reported that from like-for-like businesses the trading performance is down 6.4% year-on-year, with a reduced new car performance partially offset by improvements in used cars and aftersales.

It said used vehicle sales continued to perform well and while unit sales were down 6.6% (like-for-like unit sales down 2.6%) following its closure of Swindon Motor Park part way through last year and the recent franchising changes, the reduction in units has been “more than offset by improved profit retention” with gross profit per unit continuing to increase “significantly”.

New vehicle sales volume was down 16.8% (like-for-like down 14.6%), but the gross profit per retail unit improved over the same period as a result of mix shift to the premium and high luxury businesses, it said. However in the group's like-for-like businesses the new gross profit per unit was down 3.2% against the background of margin pressure in the market.

Cambria warned the changes in the emissions testing regulations to Worldwide Harmonised Light Vehicle Testing Procedures ("WLTP") has “created some volatility in new car vehicle supply” up to September 1 and there is potential for vehicle supply constraints with certain manufacturers in quarters three and four this year.

Mark Lavery, Cambria’s chief executive, said the group is confident of delivering a full year result in line with market expectations, and the group is delivering “solid financial results in a difficult market which has not been helped by the government's inconsistent messaging around its forward-looking position on diesel engines”.

"The team has had a busy 2018 thus far with a number of franchising changes and delivery of major property refurbishments and developments.

“Whilst the property and franchising initiatives have impacted the current financial year, they leave the group well placed with a significantly enhanced property portfolio and an increase in representation in the high luxury segment.

“The addition of two Bentley, two Lamborghini and one McLaren franchise have helped diversify the group's brand portfolio while also providing a significant opportunity as these businesses mature in their new sites. The board is confident the platform is now in place to drive future growth."