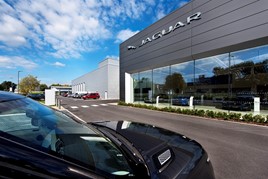 MCS Group has completed the construction of Cambria Automobiles' new £6.5 million Jaguar Land Rover dealership on the site of the former Swindon Motor Park in Wiltshire.

Cambria had closed and demolished the Swindon Motor Park to make way for the 3.2-acre redevelopment which provides facilities for an 18-car showroom, 22-bay workshop, two MOT bays, a large parts department, and extensive used vehicle display and parking areas including a 130-space rooftop car park.

Jason Button, group property director at Cambria Automobiles, said: “This is our second ARCH concept JLR dealership to be completed, both of which have been constructed by MCS, and once again the team have delivered a very high quality dealership facility. It is refreshing to work with a contractor who truly cares about the quality of the build, whilst ensuring the project is completed on time and within budget.”

It is the second project MCS has delivered for Cambria this year, following the completion of a new Lamborghini dealership in Tunbridge Wells, which officially opens next month.

MCS Group has built and refurbished more than 300 car dealerships since its inception in 2003. The Warwickshire-based company has worked on a string of high-profile projects for brands including Audi, BMW and Jaguar Land Rover, ranging in value from £50,000 to £250m.