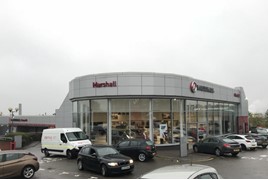 A former Vauxhall dealership in Leicester is on the market following its closure by Marshall Motor Holdings.

Vauxhall is still represented in Leicester by Drive Motor Retailing.

“The decision to close our Leicester site was made with the full support and approval of Vauxhall Motors,” Hunton said on its website.

Property consultancy Rapleys has begun marketing the two-acre freehold site, which sits opposite Porsche Centre Leicester on the A563 Thurmaston Lane, which forms part of the Leicester outer ring road.

It has a 10 car showroom and 15-bay workshop, and a freestanding double bay valeting facility.

It comes almost a year after the AM100 dealer group announced the closure of Marshall Vauxhall Welwyn Garden City.