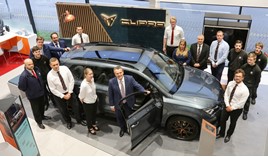 The opening of Snows Motor Group’s new Cupra showroom has marked the addition of a 50th franchised dealership to the Southampton-based group’s car retail portfolio.

The AM100’s 50th-placed retail group, which is now in its 56th year of trading and now employs 952 staff, reached the milestone figure with Seat’s recently re-branded performance car marque.

Now established as a brand in its own right, the Cupra brand now sits in a facility alongside Snows’ Seat Portsmouth on the Airport Service Road, Portsmouth, and becomes the 19th manufacturer brand represented by the group.

Stephen Snow, Snows Group’s chairman, said: "Our Cupra appointment is a significant milestone for our business. 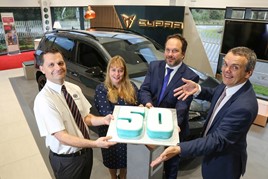 "It is our 50th franchise dealership and further strengthens our offering to customers who rightly expect exemplary service and choice in a highly competitive market.

"We have been in the business of selling vehicles to hundreds of thousands of customers over half a century and my late father, Geoff, passionately believed that nothing matters more than customer service as the driving spirit of our business.

"There is further cause for a 50th celebration as we have entered, for the first time, 50th position in the largest 100 UK automotive retail groups in Great Britain."

Family-run Snows has a turnover of more than £310 million and acquired its 49th dealership – a single-site multi brand at Walton Road, Farlington, Portsmouth, selling Fiat, Mazda and Peugeot – just last month. Abarth, the performance hatch arm of the Fiat marque, has also now been introduced at the location.