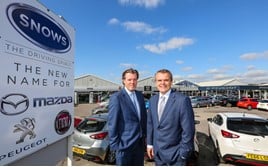 Snows Group chairman, Stephen Snow, said: “This is another strategic acquisition for the business, further strengthening our offering to discerning customers in the Portsmouth region and creating economies of scale in a highly competitive market.

“We already represent Fiat in Southampton, the Isle of Wight and Sarisbury Green, near Fareham, and it is great to be able to do the same in the great city of Portsmouth.

“Furthermore, we’re able to fly the Peugeot flag here as well, dovetailing with our other Peugeot dealerships in Basingstoke, Chichester, Newbury and Romsey.”

Snow said that the group had long aspired to expand its trading operations in Portsmouth, where it already operated BMW, Mini, Seat and Toyota dealerships.

With the new franchise in Portsmouth, Snows now has a total of 49 franchised dealerships, 11 specialist used vehicle outlets, called Too Good to Auction, five manufacturer-approved repair centres and a specialist Accident Repair Centre.