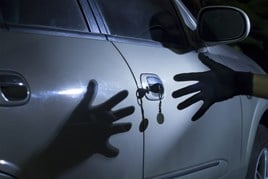 Tracker has warned motorists that 88% of stolen cars in 2018 were removed without the owners keys, confirming that keyless theft is a “harsh reality”.

The most recent Home Office figures on Police recorded crime highlighted that 50% of the UK’s reported stolen vehicles are never recovered.

Tracker’s head of police liason, Clive Wain, said: “Car theft is much lower than it was 30 years ago, but it’s on the rise again, with some pointing the finger at keyless technology.

“Sadly, this is supported by our own data which confirms that last year, 88% of the stolen vehicles fitted with a Tracker device that were then successfully recovered by us, were stolen without using the owner’s keys.

“It’s worth remembering that vehicle security should be multi-layered and shouldn’t just rely on a keyless security system. Traditional physical barriers, such as crook locks and wheel clamps can help deter thieves, but in the event of a car being stolen, vehicle tracking technology plays a powerful role in outwitting thieves.

“Investing in a tracking device won’t stop a car being stolen, but it can significantly increase the chances of police locating it and returning it to the rightful owner. This, plus added vigilance, dramatically contributes to keeping thieves at bay.”