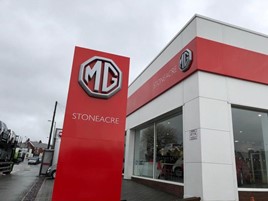 Stoneacre has become the latest new addition to the MG Motor UK car retail network with the opening of a new franchised site in Greater Manchester.

The South Yorkshire-based AM100 retail group is the highest profile addition to an MG network which has added a series of new franchised partners to its network since the start of 2019.

With the addition of its new MG dealership on Market Street, Hyde, Stoneacre now represents 24 brands across northern England and north Wales.

“We’re sure that Stoneacre customers will be attracted by MG’s fantastic cars and iconic British badge.

“Following the launch of the New MG3 last year and the recent announcement of the MG ZS electric car, there’s a real buzz surrounding MG and we’re excited to be a joining the network at such an exciting time.”

Mark Hallam, network development manager at MG Motor UK, added: “Stoneacre Hyde is a great addition to the MG network and we’re delighted to have them on board.

“We’re a very ambitious brand and 2019 promises to be an exciting year for us. Adding new dealers with the calibre of Stoneacre will help us to bring great MG customer service closer to the British public.”

Earlier this week Stoneacre reported turnover growth of 9% and profit before tax up 34% in its financial results for the period to April 28, 2018.

The retail group took strides towards its ambition of becoming a £1bn turnover business in a period which ended with a series of acquisitions.