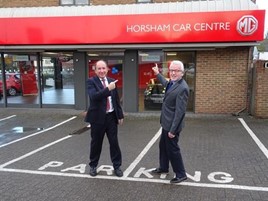 Horsham Car Centre was established in West Sussex 27 years ago and now operates from two sites in Horsham.

The new MG Motor UK showrooms, opened on February 1, are located at Roffey Corner with the aftersales facility located less than one mile away at Horsham Trade Park.

Horsham Car Centre’s dealer principal, John Pudney, said: “MG had a very successful 2018 and we’re proud to be part of this amazing story.

“The whole team here at Horsham Car Centre is over the moon at the opportunity of joining the fastest-growing car brand in the UK, and we look forward to selling and servicing MG vehicles in West Sussex for many years to come.”

MG Motor UK’s national development manager, Mark Hallam, said: “We’ve got big plans for 2019 and it’s great to have strong new dealerships like Horsham Car Centre on board for the journey. We have many more new appointments in the pipeline but we’re always keen to speak with ambitious dealerships who want to grow with MG.”