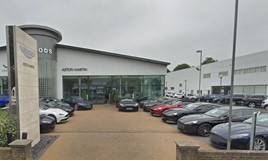 Harwoods Group has confirmed that construction of a new Aston Martin dealership will start on the former Ford Transit factory in Southampton after it acquired part of the site from Inchcape.

The £1.7 million land purchase by commercial property consultancy Vail Williams LLP, on behalf of automotive retailer Harwoods Group, signalled the green light for the building by the M27 at Swaythling.

The 1.33-acre site was surplus to the requirements of Inchcape Estates, which is building a Jaguar Land Rover dealership on part of the site Inchape Estates bought from developer Mountpark.

Harwoods currently operates an Aston Martin franchise in Chichester - alongside it representation of Audi, Bentley, JLR - and the new facility is expected to be open by Spring 2020.

The Harwoods Group’s chief executive, Archie Harwood, said: “We’re grateful to Martin and his colleagues at Vail Williams for securing us an ideal site for our state-of-the-art Aston Martin showroom for discerning motorists looking to own the iconic, luxury British sports car.

“We anticipate the new showroom opening in Spring 2020 and are planning to recruit a number of skilled roles to be based there, which is good news for the local and wider community.”

Russell Mogridge (pictured), a Vail Williams partner who leads transactional services for the Solent region, said: “We were instructed by Harwoods to undertake a search for suitable premises for a new prestigious Aston Martin dealership.

"After a comprehensive search we identified a parcel of land which was surplus to the requirements of Inchcape Estates.

“Following terms of agreement, ownership transferred to Harwoods, with a state-of-the-art Aston Martin showroom to be built. The acquisition figure was £1.7 million.

“The deal is the latest example where Vail Williams’ occupier advisory service has been utilised by growth companies with property requirements which range from retail showrooms, shops and restaurants to head offices, factories and warehousing.”

Martin Tice, a consultant for Vail Williams in the Solent region, said: “A key factor in the purchase was location – the site is close to the M27 and connecting M3, as well as Southampton Airport and, via Southampton Parkway, the main rail link to London Waterloo.

"With Aston Martin, Jaguar Land Rover and Mercedes close by this will be a significant high-value motor trade hub.

“Securing the right location is never easy because demand continues to outstrip supply along the M27 Corridor. A number of sites were considered in this year-long search for Harwoods.”

The Aston Martin dealership will be located next to Mountpark Southampton, a premier new industrial and logistics development with seven units totalling 554,480 sq-ft.

Before being sold, the original assembly operations at Swaythling stretched over 44 acres and produced Transit vans before the last one rolled off the production line in July 2013.

According to reports, a total of 1,200 jobs will be generated by the £100 million redevelopment of the disused factory site, which traces its roots back to 1939 as an aircraft components manufacturer.