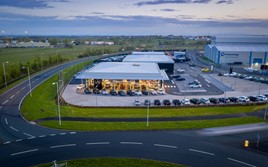 Sytner Group has revealed that construction work has finished on its £6.5 million flagship Mercedes-Benz showroom and workshop at Kingmoor Park in Carlisle.

Replacing a previous facility in Rosehill Industrial Estate, the new franchised dealership site offers an opportunity for the Sytner team to provide its clients with a higher level of service and attention, it said.

The new facility, developed by Caddick Construction, will create over 20 new jobs in the area.

Sytner Group’s project manager for the new Carlisle facility, John Buchans, said: “We are delighted with our new state-of-the art facility in Carlisle that represents the first of the Mercedes Benz new corporate identity in the UK.

"Caddick have helped us build a real show-stopping environment which is now much more befitting of the brand we represent."

The new site benefits from 18-bay workshop, designed to meet the demands of customers, while an approved used car display will rise from 40 to 90 cars.

Mercedes-Benz of Carlisle's head of business, Barry Crooks, said: “The new site is a world apart from our previous home which we had completely outgrown and is bigger and better in absolutely every respect.”

Derek Billows, Contracts Manager at Caddick Construction, said: “The showroom looks fantastic in such a notable location. We have worked closely with Sytner to ensure the highest quality environment, using our wealth of expertise in delivering automotive developments across the north of England.”

The developer's automotive team is currently on site constructing the £41 million Jaguar Land Rover (JLR), Mini and BMW showrooms at the Trafford City Development as well as JCT Porche in Newcastle.