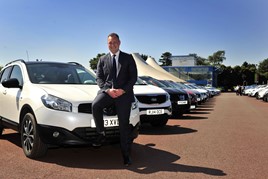 Sytner Group will further expand its used car supermarket division with the opening of a new CarShop location in Nottingham if plans for the new site gain the approval of city officials.

The AM100’s number one retail group has submitted plans to transform a former Homebase store, off Queen’s Road, into the latest addition to its growing used car division.

Around 700 vehicles are expected to be displayed at the new facility, which is could create around 200 new jobs if the business also realises plans to create a new workshop facility – in nearby Lenton Lane – to run alongside the planned retail site.

Speaking to the Nottingham Post Jonathan Dunkley, chief executive of CarShop (pictured), said: “We’re delighted to have commenced our plans to move into the East Midlands. It’s a very exciting opportunity, and it’s something the whole team has high expectations for.

“We have an ambitious five-year plan to allow us to better cater for customers’ car-buying needs right across the UK.

The Car People has retail sites in Sheffield, Stockport, Wakefield and Warrington.

Tamsin Cottle, planning director at JLL, was positive about the prospects of the new proposed new venture. She said: “Given the challenging retail market, the occupation of such a prominent site should be seen as positive for the city.”