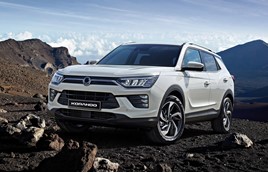 SsangYong has expanded its UK dealer network after appointing Rogate in Petersfield, Hampshire.

Nick Laird, SsangYong Motors UK managing director, said the brand is ramping up its network expansion plans in the run up to the launch of its new Korando SUV next month. The new model is expected to get an EV variant next year.

There are now 66 SsangYong dealers in the UK and Rogate is the second appointment this month, following on from Platinum SsangYong in Frome, Somerset at the start of August.

SsangYong appointed a dealer recruitment manager earlier this year to help appoint more retailers. SsangYong also issued sales targets for the first time to its network in March when it launched the new Korando.

Laird  said: “We have been and still are looking to attract new dealers across the UK.

“The focus on the expansion of our dealer network is of paramount importance to our customers, so we are delighted that Rogate SsangYong had decided to add our brand to its portfolio in Petersfield.”

Rogate SsangYong is located ont he A272 between Petersfield and Midhurst and had been a Renault dealer since 1979. It still offers Renault aftersales and specialises in nearly new used cars, as well as boats and collectibles.

Mike Luff, Rogate dealer principal, said he was attracted to the SsangYong brand due to the new product line-up making its way to the UK.

He said: “We were particularly attracted to the new Korando, which is due to reach showrooms in time for the September 1 plate change.

“We have been investing in our future and we hope to provide even better customer service and value for money products for many years to come and grow our business as a result.”