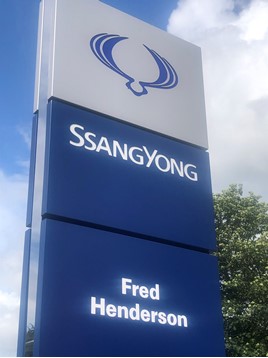 Fred Henderson has added the SsangYong franchise to its Durham showroom as the Korean brand continues its dealer network expansion in the UK.

Fred Henderson is the third SsangYong dealer to be appointed in the last month, following on from Rogate in Hampshire and Platinum SsangYong in Frome.

The new addition to the SsangYong network takes the brand’s representation to 67 and Nick Laird, SsangYong Motors UK managing director, said the brand is ramping up its network expansion plans in the run up to the launch of its new Korando SUV next month. The new model is expected to get an EV variant next year too.

David Henderson, dealer principal at Fred Henderson Limited, said: “We are excited to expand our retail franchise offering to include SsangYong Motors.

“We are very pleased with the franchise, and greatly look forward to growing our business as a result. SsangYong has a great new range, and with very competitive pricing and seven-year/150,000 miles warranty, we believe it will do extremely well in our area.”

Fred Henderson started up Fred Henderson Automobile Engineers and commenced trading in a disused workshop underneath the railway bridge in Durham during January 1973, expanding the business by 1980 and moving closer to the city centre.

With his rally career drawing to a close, Henderson’s focus switched to taking responsibility of marketing motorsport products across the world, eventually changing direction into breakdown and recovery services.

Joined by his son, David, in 1994, the business moved to retail quality used vehicles as well as taking on a Bosch Car service franchise to support an already strong technical expertise. Further expansion took place in November 2016 when Fred Henderson Ltd joined the MG Motor UK franchise and became a retailer for new MG vehicles.