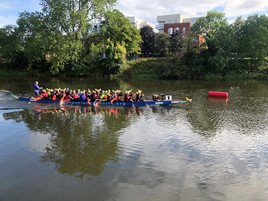 A team of Dragon Boat racers from Donnelly Group have raised £3,725 for MacMillan Cancer Support in the car retailer’s first fund-raising event since naming the cancer charity as its chosen cause for 2019.

A total of 38 employees from the Northern Ireland-based Group volunteered to take part in the annual dragon boat race on the River Lagan and the event was hailed as an “overwhelming success”.

Donnelly Group brand director, Roisin Donnelly, said: “For over 70 years the Donnelly Group has supported our local community and through our newly launched Donnelly Foundation we are delighted to support such an incredible charity, and one that is very close to our hearts.

“This Dragon Boat Race was our first planned activity to support Macmillan and we were completely overwhelmed by the number of employees who volunteered to paddle their hardest to raise funds for this amazing cause.

“Macmillan receives no government funding and relies on voluntary donations, so we’re proud to have raised £3,725 with money still being donated.

“We look forward to adding significantly to this total through many more events we already have planned over the next year.”

Donnelly Group officially launched its new Donnelly Foundation with news of a partnership with Macmillan Cancer Support back in July.

The Northern Ireland family-owned motor retailer's 800 staff, who are located across the group's nine locations, will volunteer time and enthusiam to raising cash for the cause.

This year eight teams competed in the annual Dragon Boat race, which sees local teams of all ages and abilities racing against each other to win trophies and raise money for Macmillan Cancer Support.

Donnelly said: “It was a great effort by everyone from Donnelly Group who took part, especially as we’d never paddled together as a team before the day.

“We all had a fantastic time and we’re really proud we’ve helped raise money for such a great cause in the process. We’ll definitely be back next year.”

Joanne Young from Macmillan Cancer Support said: “We’re now working closely with the Foundation team and look forward to engaging with the employees as they get involved with our jampacked calendar of events and fundraising initiatives.

“Early indications are that around a total of £12k is expected to have been raised through this Dragon Boat race this year and all monies raised will be going to Macmillan Cancer Support.

“Approximately 30 people are diagnosed with cancer every day in Northern Ireland and this partnership with the Donnelly Group will allow us to continue delivering care and providing support to those in need within our local communities.

“We would just like to say thank you to all of those teams that took part, to all of the people that came out to cheer on the boats and indeed to all of our volunteers who gave up their time to make sure this event ran smoothly. Without this generosity and goodwill, we wouldn’t be able to help the people that need our services.”