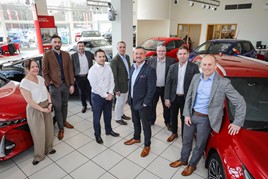 Curtis Toyota’s Ballymena car dealership has been named as the Japanese car brand’s UK Retailer of the Year 2020.

The annual Toyota Best Retailer in Town Awards - known as the BRITs - were presented by comedian Dara O’Briain and Toyota GB general manager Mark Roden at The Renaissance Hotel in St Pancras, London, on February 26.

The BRITs recognise the top performers amongst Toyota's 180 retailers in the UK and are based on cumulative scores across the business, from new and used vehicle sales, to marketing and customer feedback.

The full list of awards from the events were:

Commenting on Snows Motor Group’s awards success, which saw it claim the Best Toyota Group award and come second in both the ‘Retailer of the Year’ and ‘Aftersales’ categories, the group’s chief operating officer, Alex Domone, said: “Best Group is the most coveted prize in the Toyota retailer world and this win, along with our other two awards, recognises the great strength, commitment to performance and huge amount of effort from everybody within Snows Toyota.

“We are all delighted with this award and it’s a magnificent win for everyone concerned. Following some much-justified celebration, we will be returning to the job in hand - winning again next year.”

Stephen Snow, chairman and chief executive of Snows, added: “This reward is richly deserved and myself, along with everyone across the business, is immensely proud of the achievement.”

Last month Snow announced he would be heading up a new executive board of directors at the Snow Motor Group’s fourth annual conference.

Steven Eagell Group, meanwhile, revealed a change of ownership of a number of Toyota franchises earlier this month.

The Milton Keynes-based operation confirmed the acquisition of four Toyota and two Lexus car dealerships in the West Midlands from the Vantage Motor Group on March 9 – five days after AM exclusively reported on the pending transaction.