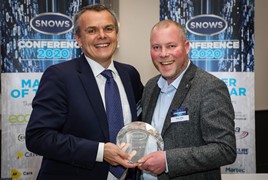 Snows Motor Group chairman and CEO Stephen Snow (pictured left) announced he would be heading up a new executive board of directors at the Group’s fourth annual conference.

In addition to Allen Scott, director of Marketing, PR & Communications there are three, newly-appointed directors: Melanie Durrans – Human Resources, Richard Betts - Corporate Sales & Fleet, and Robert Newbold – Finance and Insurance including FCA Compliance - whom will also report into the Executive Board to enable more swift and effective decision-making within the business.

“I’m extremely pleased that many of our homegrown talent have stepped up to take on management responsibilities as we move into 2020.

“This new framework, coupled with the continuing dedication and hard work of all our people will enable Snows to deliver on our aspirations in 2020.”

Snow also named Greg Jones (pictured right) of Snows Peugeot Basingstoke as Manager of the Year at the conference.

He was credited for achieving all KPIs in sales and 100% customer satisfaction.

The Snows annual conference is a combination of analysis, performance and industry insights under the banner of 'One Team One Vision'.