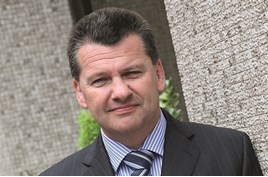 Lavery said that he had been open with the AM100 retail group’s employees in a series of five weekly podcasts during the COVID-19 lockdown, stating that “there will be significantly fewer of us and we’ll return to a significantly changed business”.

Lavery said that he expects “Darwinian evolution” of the car retail sector with up to 25% to 30% of car retail businesses to go out of business or be taken over within the next two years as the effects of the pandemic continue to take their toll.

Speaking to AM following publication of an interim results statement for the six-month period to February 29, which was published today (May 6), he said: “We don’t yet know whether what we are facing is a recession or a depression.”

Lavery added: “Have we ‘war gamed’ redundancies? No. And at this stage the furlough scheme has been extended to the end of June.

“If (the Chancellor of the Exchequer, Rishi Sunak) doesn’t extend the scheme beyond that point then we will have to start planning. There is a possibility of over 100 redundancies.”

Lavery has taken a 50% pay cut and other board members have volunteered to reduce their salary and fees by between 20% and 50% after Cambria placed much of its workforce on furlough.

Around 12% of its staff are currently still working to provide aftersales functions and limited vehicle deliveries to keyworkers during the COVID-19 lockdown.

Lavery said that the business had delivered 22 vehicles since the closure of its showrooms, in-line with Government guidelines, on March 24.

He told AM that the group’s luxury franchise portfolio could help it recover trade from an aftersales point-of-view as lockdown restrictions are eased. “Many of the vehicles that we sell are designed to be driven and if they are stood still for six or seven weeks the first thing their owners should do is bring the to the dealership for a service,” he said.

However, he remains pragmatic about the outlook for the sector and said that ground would not be broken on the group’s planned new Aston Martin showroom in Solihull until things became clearer.

Lavery said that his decision were still based on a three-phased approach. He said: “First lockdown, secure assets and look after associates; second, a fast return to work with a small number of associates; finally, we wait for the end of the government support to see what the optics of the industry are like.”

Chancellor of the Exchequer Rishi Sunak took to Twitter today to promise that there will not be a ‘cliff edge’ ending to the Government’s CJRS scheme.

However, he conceded that “some scenarios show we are potentially spending as much on the furlough scheme as we do on the NHS”, adding: “I am working out the most effective way to ease people back into work.”

Government is currently paying the wages of 6.3million UK workers under its CJRS furlough scheme at a monthly cost of £8bn. By comparison, the monthly NHS budget is £11bn.

Many national news outlets reported to day that furlough payments could be reduced from its current rate of 80% of an employee's monthly salary (up to a £2,500 limit), to 60% from July.

Car retailers would benefit from more flexibility from Government’s coronavirus job retention scheme (CRJS) like that already adopted in France.

The Independent Garage Association (IGA) has written to the Chancellor of the Exchequer, Rishi Sunak, requesting an enhancement to the furlough scheme so that employees can partially return to work as the country prepares for the next phase of COVID-19 lockdown restrictions.

The same policy could be advantageous to smaller, solus car retail operators.

AM understands that some car retail groups have already begun consulting staff over the possibility of redundancies as they begin their plans for the re-opening showrooms amid continued social distancing measures and dramatically reduced consumer demand.

Clive Brook group managing director, Clive Brook, said that he intends to get his two-site Volvo Car UK franchised business in Yorkshire 100% up and running within a fortnight, but said returning staff to the business’ payroll during the period of low demand posed “the biggest risk to the business so far”.

Vertu Motors chief executive, Robert Forrester, meanwhile, said that “a very measured approach” was required to ensure that his businesses resources could be backed by demand.

COVID-19: What lockdown support has your car dealership received?

COVID-19: What lockdown support has your car dealership received?