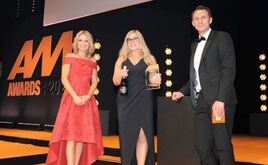 A motivated team working dynamically to meet its goals to exceed the expectations of its customers and managers secured the AM Awards 2021’s Best Sales Team award for Marshall Mercedes-Benz of Southampton.

Starting from a £95,027 profit on their return from furlough in May – some £292,122 behind budget – the team set out to deliver its full-year profit of more than £1 million but smashed that budget by 10% in just more than six months.

The dealership’s AM Awards entry detailed how its workforce showed flexibility, resilience and imagination to adapt to what was an “unknown sales environment”.

Initially focussing on used cars and click and collect, and establishing a temporary covered outside handover area to facilitate the process, the sales team closely referenced a live daily spreadsheet to guide their focus on new or used cars each day after Mercedes removed its sales targets.

The shift in mindset meant vehicles need not be undersold at a time when replacement new and used car stock was hard to come by.

General manager Lee Taylor said the strategy succeeded in growing margin and pride in the product.

Improved profit did not come at the expense of customer care, demonstrated by a CSI score of 97.37%.

Marshall Mercedes-Benz of Southampton also came top of all Marshall’s 122 locations for profit from finance and insurance in 2020.

Furthermore, the adoption of a ‘buddy system’ among sales executives allowed the dealership to adopt an ‘always on’ approach to customer enquiries.

Taylor said this also guaranteed his hardworking team time to switch off from the business, knowing a colleague would handle requests in their absence.