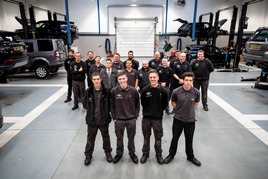 Vertu Motors has recorded an increase in employee satisfaction during 2021, with more than 90% of its staff members saying they enjoy their job.

The data comes from the AM100 dealer group’s 2021 Colleague Satisfaction Survey, to which the highest ever number of Vertu colleagues - including technicians and service advisors in aftersales and sales executives and advisors in sales - gave their views on a wide range of topics.

Overall, Vertu employees were said to give a “hugely positive insight” into working for the company.

More than 90% of colleagues said that they enjoy their job and 99% said they understand how what they do can have a positive impact on the company.

Robert Forrester, chief executive of Vertu Motors, said: “We are currently recruiting new technicians who can rest assured that the company is a great place to work. They can also be safe in the knowledge that with our investment in their personal and professional training and development, we can provide them with excellent career prospects too.

“It is very reassuring to learn that colleagues across the Group hold the business, and their place in it, in such high regard. Year on year, the results have improved, and this reflects our commitment to delivering on our promises to colleagues.

“We place a high value on talent, drive, energy, attitude and character. Colleagues with these attributes have the opportunity to build a fantastic career and we are always on the lookout for more talented people to join us across a range of disciplines.”

The survey was completed by more than 85% of colleagues across the Group. Of those, 85% said they would recommend the company as a “great place to work” to others.

In December, Vertu Motors announced that it had increased its forecast profit before tax for the current trading year by £5 million, as October and November's profitability was ahead of plan.

Vertu also said it had made progress in its response to labour shortages, as indicated in its interim results, and changes to reward packages have been rolled out.

It still reported having a higher than normal level of job vacancies, despite this having reduced in recent months.